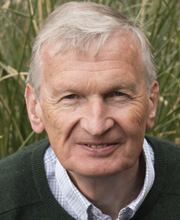 In 1983 he joined NERC as head of the Cartographic Research Group in the Thematic Information Services (TIS) Section of NERC Scientific Services. In 1985 this was assimilated into the University of Reading's NERC Unit for Thematic Information Systems (NUTIS) (later renamed the NERC Environmental Systems Science Centre (ESSC)), for which he acted as Deputy Director until 2002.

He was promoted to NERC Grade 6 IMP (Individual Merit Promotion) in 1990. He retired from NERC in 2002, but continued to work in ESSC (and latterly the Met. Department) as an Associate Professor until 2014.

David's research at Reading has been as an environmental physicist, and has involved work on the automated extraction of information from remotely sensed data, and the linking of these data to environmental models in order to improve the models.

He has developed methods for the automatic extraction of waterlines (instantaneous land-water boundaries) from Synthetic Aperture Radar (SAR) images in both riverine and coastal scenarios in a number of projects. These include projects to improve river flood models by extracting flood extents from SAR images to validate hydraulic model flood extents, and by processing airborne LiDAR data to allow these to be used for parameterisation of model floodplain topography and friction (NERC CONNECT-B (1998), EPSRC NEXGEN (2004)).

He continued this work as a Co-I on EPSRC FRMRC-1 and FRMRC-2 projects, including developing a method for detecting flooding in urban areas using TerraSAR-X and LiDAR data. A near real-time algorithm to detect flooding in SAR images in both urban and rural areas was developed in a recent NERC TPOC project (2010-11).

He is currently involved in the NERC DEMON project improving hydraulic models by assimilating SAR-derived water levels into the model run. On the coastal side, he was PI on a BNSC LINK project to construct a DEM of the inter-tidal zone from SAR waterlines (1999), Co-I on the EU TIDE project (2004) studying the evolution of tidal channel networks, and Co-I on a NERC FREE project that assimilated SAR waterlines and other bathymetry into a coastal area morphodynamic model to improve the model.

He has published about 110 refereed journal papers and book chapters, and has an h-index of 25. He has managed about 20 staff at PDRA and postgraduate level since 1984.

He joined the Department of Geography and Environmental Sciences in May 2014 as a Senior Research Fellow working for Dr Hannah Cloke. He is involved in the SINATRA project (funded under the NERC Flooding from Intense Rainfall programme) working on improving hydrologic models by assimilating remotely sensed high resolution soil moisture measurements into the model run.