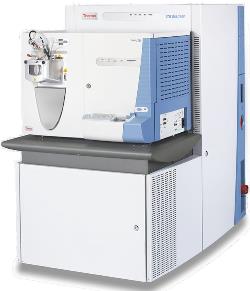 The Orbitrap mass spectrometer is a hybrid instrument that has two distinct mass analysers. The Orbitrap features a linear ion trap front end (the LTQ) that can effectively be run as an independent mass spectrometer. The LTQ operates at unit mass accuracy and in most routine operations is used in a simple 'pass through' mode, where ions are simply allowed to progress through the trap into the Orbitrap mass analyser. The Orbitrap mass analyser is used to attain mass measurements where the typical mass error is 1-3 ppm with external calibration (an internal lock mass can be defined to lower the mass error to typically 1 ppm). The resolution attained from the Orbitrap mass analyser is dependent on ion residency time and can be set to between 7,500 - 100,000 FWHM, typically the instrument is run with a resolution of 30,000 unless the analysis demands it be increased. The Orbitrap instrument is capable of carrying out ion selection and fragmentation (MS/MS, MSn), ions can be fragmented via CID or HCD, fragmentation experiments can be run in a user defined method or via data dependant algorithms.

Ionisation is via Electrospray Ionisation (ESI) or Atmospheric Pressure Chemical Ionisation (APCI). Samples are introduced to the instrument via direct infusion or HPLC gradient elution. A nanospray source is available for very low flow rates used in analysis of complex biological samples.