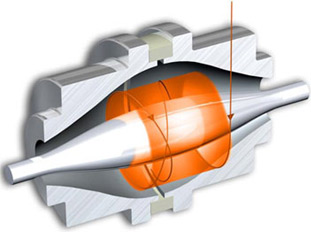 In an orbitrap, ions are injected tangentially into the electric field between the electrodes and trapped because their electrostatic attraction to the inner electrode is balanced by centrifugal forces. Thus, ions cycle around the central electrode in rings. In addition, the ions also move back and forth along the axis of the central electrode. Therefore, ions of a specific mass-to-charge ratio move in rings which oscillate along the central electrode. The frequency of these harmonic oscillations is independent of the ion velocity and is inversely proportional to the square root of the mass-to-charge ratio (m/z ). By sensing the ion oscillation similar as in the FTICR-MS, the trap can be used as a mass analyzer. The resolving power of an Orbitrap mass analyzer is proportional to the number of harmonic oscillations of the ions, as a result the resolving power is inversely proportional to the square root of m/z and proportional to acquisition time. For a resolution of 7500 at m/z 400 a transient time of 0.1 is required. As a direct result of the interrelationship of oscillation frequency and mass to charge ratio the resolving power decreases as the m/z value increases so that at a m/z value of 1600 the resolving power has halved to 3750 per 0.1 second transient. As signal processing adds approximately a 0.1 second overhead the total cycle time per transient at a resolution of 7500 is 0.2 seconds giving a scan rate of around 5 Hz.