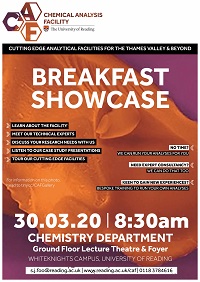 The Chemical Analysis Facility (CAF) will be running an inaugural breakfast event on Monday March 30th at 8.30am to showcase their facilities to businesses in the Thames Valley area.

This is a good opportunity to meet the Technical experts and listen to keynote speakers. An optional tour is also provided.

To register go to Eventbrite

For more information on the photo go to tiny.cc/CAFGallery 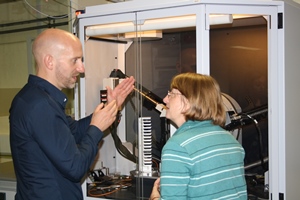 Presenter of "Inside Out", Jon Cuthill and producer Talia Slack recently spent an afternoon filming in the CAF after powder X-ray, NMR and mass spectrometric analyses had been carried out on a face cream called "Kalme" that claimed to use an extract of capers to improve a facial condition known as rosaceae, a reddenning of the face that can be acutely embarrassing to individuals suffering from it.

Powder diffractometry by Dr. Ann Chippindale and Nick Spencer showed conclusively that the micronized zinc oxide stated to be in the cream was actually nanoparticulate - roughly 500 times smaller. This is important as some people have issues with putting nanoparticulate materials on their skin.

NMR analysis by Dr. Geoff Brown and mass spectrometric analysis by Dr. John Mckedrick, Nick Michael and Martin Reeves showed that any caper extract in the product was present in vanishingly small quantities - about 3 parts per million of the total extract, and considerably less than that of any single component, of which the producers claim 7 with only 3 being "cappaprenols", the actual materials stated to help to cure rosaceae. 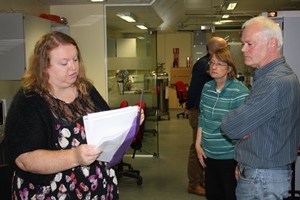 The programe was transmitted on Monday 2 November at 7.30 pm and included some great shots of the instrumentation and interviews with the Director of CAF Prof. Laurence Harwood.