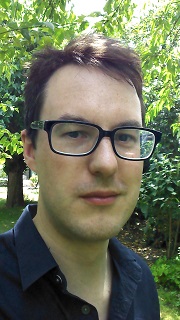 Henry K. Miller is an historian of film culture and film criticism, currently embarked on "The Legacies of Stephen Dwoskin", a three-year, Arts and Humanities Research Council (AHRC) -funded research project based at the University of Reading. Learn more on the Dwoskin Project twitter account (@DwoskinProject).

His book The First True Hitchcock is forthcoming from University of California Press in 2022. He has published his research in journals including Critical Quarterly, Framework, Screen, and the Hitchcock Annual, as well as Sight and Sound, the Times Literary Supplement and a variety of DVD and Blu-ray booklets. With Brighid Lowe he is co-director of the Slade Film Project.

Before joining Reading, he taught film at the University of Cambridge, where he is an affiliate of the Centre for Film and Screen. He has also taught at Anglia Ruskin University. Since 2015, he has been an Honorary Research Associate at the Slade School of Fine Art, University College London.

He read modern history at Wadham College, Oxford, and has a PhD from Birkbeck College, University of London.

In 2014, he edited The Essential Raymond Durgnat for BFI/Palgrave Macmillan, having earlier written the foreword for the second edition of Durgnat's last book, A Long Hard Look at 'Psycho'.