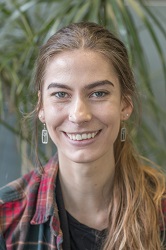 Gender and religion in Early Medieval Wales: The archaeology of religious transformation in Wales, c. 400-1200 CE

My thesis is an interdisciplinary study of gender in medieval Wales, c. 400-1200 CE – the post-Roman to Norman period. It is fully-funded through a University of Reading international student scholarship.

This study is primarily archaeological, but also employs historical, art-historical, and linguistic methods to analyse gender in the available religious evidence. The primary sources for the thesis are the inscribed stones and stone sculpture and the literary sources: hagiography, charters, and law codes. A focus on religion and the development of the Welsh Church is not only important for the larger context of this study, but it is also the most effective way to access the study of gender. A study of gender for this region and time period has not yet been done and will add to the wider scholarship on gender for the early medieval period as well as for Wales specifically.

I hold a BA in History from Brigham Young University in the United States, with minors in Philosophy and Women's Studies. I hold an MA from the University of Utah in the United States. My MA thesis focused on medieval gender in Wales and Ireland and was a study of the historical literature. I was awarded a scholarship to join fieldwork at Blackfriary in Trim, Ireland. This has allowed me to combine both historical and archaeological approaches for my PhD thesis.