The Pro-Vice-Chancellor Research and Innovation is responsible for the University’s research strategy at Executive Board level, and drives its performance, with the aim of positioning the University of Reading firmly amongst the leading research universities in the UK and internationally.

For the first time, this role is held as a job-share between Professor Dominik Zaum and Professor Parveen Yaqoob, with a division of research themes and strategic priorities between them; Professor Zaum takes responsibility for Heritage & Creativity, Environment, the Graduate School and the Innovation & Impact Centres; while Professor Yaqoob takes responsibility for Food, Health, Prosperity & Resilience, and the Interdisciplinary Research Institutes. Membership of relevant project groups and boards reflects alignment with the themes and priorities. 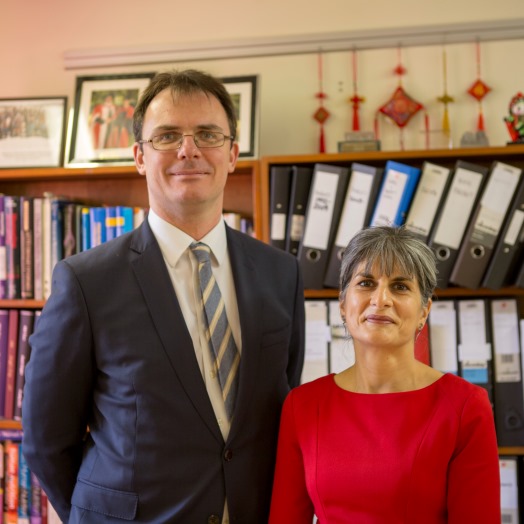 Professor Yaqoob graduated with a BA in Physiological Sciences and subsequently a DPhil in Biochemistry from the University of Oxford.

Following post-doctoral positions at both the University of Oxford and the University of Southampton, she was appointed to a Lectureship in Human Nutrition at the University of Reading in 1998 and awarded the title of Professor of Nutritional Physiology in 2010. Her research investigates the influence of nutrition on immunity, inflammation and vascular function, particularly with respect to cardiovascular disease and she contributes to a number of national and international research funding panels.

Professor Yaqoob was elected Fellow of the Association for Nutrition in 2014, appointed Head of the School of Chemistry, Food & Pharmacy in 2015 and Pro-Vice-Chancellor Research and Innovation in 2018.

Professor Zaum’s research focuses on the political economy of international post-conflict statebuilding efforts; on corruption (in particular in contexts of state fragility); and on international organisations, in particular the UN. His research has been funded by the ESRC, the British Academy, DFID, the World Bank, and the Carnegie Corporation of New York.